Eleven EFA teachers and volunteers met on Saturday and turned their attention to “action”.

What do we mean by action?

Sometimes is collective. Sometimes it is individual.

It can be social (to reduce isolation, create “cohesion”, reduce barriers between groups).

Draw an iceberg with the tip above a water-line and the bulk of it below. On the tip draw a surface-level problem, a broad, un-interrogated problem or assumption. In our case we used “it is difficult to take action with students”. Under the surface of the water you write what are the underlying causes or the deeper truths. In our case we wrote: “lack of knowledge”, “we feel isolated”, “start stuff, don’t finish” etc. Then you can add some rescue boats with remedies or things that help. In our case we added: “give examples of action”, “communicate EFA’s aims with students”, “form action groups” etc. 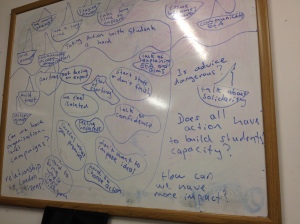 This tool may be two sessions.

First of all the group collects “issues” or “problems” facing a community. These are scribed onto raindrops. It may be better if the group works on problems facing a “community” and not directly themselves. Clearly, it’s ok if people talk about their own problems but they might feel freer and less negative doing so indirectly.

Then students choose raindrops and think of change they want in relation to the problem. Umbrellas represent immediately actionable, ameliorating change. Suns represent harder to effect change that impacts on more people. Rainbows represent our visionary change for the long-term that might only be brought about by long-hard struggle alongside more powerful allies.

problem: student living with 5 family members in one room

umbrellas: find out about free places to take the children (to get out of the house)

talk about it in class – others might have had similar situations, good to share, others might have ideas for where she can look for better accomodation
– address the problems of over crowding: are there other organisations that can support the student with stress management, free after school clubs for kids (to give them space to do their homework etc).
suns:
– restrictions on landlords that rent out over crowded rooms
– rent cap on London rents to make housing more affordable
– get students involved in a community land trust
– ‘affordable’ housing enshrined in law and linked to the minimum wage to stop developers building unaffordable ‘affordable housing’
rainbows:
– social housing stock is increased significantly
– housing for homes not for investment, speculation and profit
– EFA community land trust where we can all live in harmony!

First of all, express the problem eg “Rents on the New Era Estate are about to triple”. Then express the change that you have decided you want to campaign for eg. “We want a new owner of the estate and a guarantee of long-term, affordable rent.

Then using any symbol of your choice define

c) people with power and responsibility

(some people felt it was unclear what the difference between c and d was or that it was not really helpful to distinhuish. In our case, we generally put Boris Johnson in (c) and Russell Brand in (d).

Finally, you add actions on the various power players to make they either support you and/or put pressure on (b)s or (c)s.

eg. In our case, the NEW ERA group delivered a petition to Downing Street in order to force Cameron to pressurise Westbrook.

2) It is great to generalise/collective individual problems but it can be awkward and needs to be handled really sensitively.

4) Should we have one or two cross-organisation campaigns that people can feed into?

5) To what extent can we “campaign for” people?

6) We have to balance the need to build skills (capacity) and effect change. Ideally both happens at the same time.

8) It is vital that campaign planning, taking action and evaluating EXPLICITELY build language skills. We must ensure that a) they do and b) students see that they do.

English for Action is delighted that free school meals for infant children will be rolled out across the England. We have championed […]

“I’ve been in the UK and I’ve never seen anything like this” – Sorifa talking about the mummies at the British Museum. […]

https://chuffed.org/project/video-skills-for-migrants We want to raise £2000 to run free film and editing workshops with adult migrants in our English classes. This will […]

“I was planning to stay here but now I don’t know” “I don’t feel welcome anymore”  “What will happen to the economy?” […]